Top 3 Features of Appium Desktop Application You Might Not Know 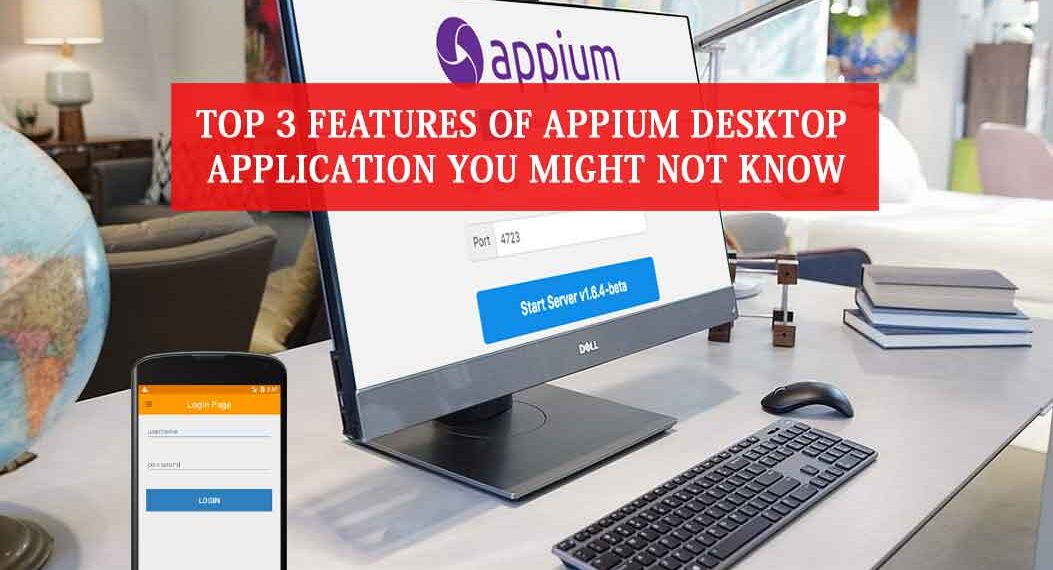 Have you ever wondered how many mobile applications are out there? Well, no less than 2.87 million apps are available for download on just Google Play Store. If calculated thoroughly, the mobile apps on the App Store and other platforms would also add to this number. Now the question is, are all apps successful? No! Do people like all apps equally? No! Do each of them functions well? No! It means there is a sure gap between usable and non-usable apps on different platforms. Now, what do you think which factors would make an app useful or not? Just to let you know, testing plays a crucial role in developing a user-friendly mobile application. Without passing your app through the testing phase, you can’t be sure about your potential customers liking it. So, what can you do to ensure your app works, responds, and displays correctly on your user’s smartphone? That’s where the Appium desktop application comes into the frame.

Now you might ask what it is and why you need to use it instead of other tools. So, we have combined the complete answer in this blog. Let’s see:

What is Appium Desktop Tool?

The Appium Desktop Tool is an open-source GUI or Graphical User Interface software that app testers use for automated mobile application testing. It is getting supported by three major operating systems, i.e., Windows, Linux, and Mac.

Do you know how does Appium desktop application works? They make the most of their components named Appium Server and Appium Desktop Inspector. The former comes in handy to run the automation test scripts, whereas the latter is suitable for UI elements identification of the testing app.

Now you might think why you need to use the Appium desktop application and not the Appium automated app testing tool for the testing purpose. Well, there is a reason for that, which you can find in the next paragraph.

Why would you prefer using the Appium desktop tool instead of its other versions?

If you are a tech-savvy person, you know well that Appium has an open-source framework design that allows testing professionals to run automated app testing tasks on Android, iOS, and Windows. With this tool at your disposal, you can automate the testing job for native mobile applications.

However, when it comes to Appium desktop software, it is a new open-source GUI application for Mac, Linux, and Windows that allows you to leverage the Appium automation server in a more organized way and with an adjustable User Interface (UI). So, now you know the primary reason to use Appium desktop software over its less-advanced counterparts.

Since that is complete, now it’s time to look at the most popular features of the Appium desktop software:

What are the three best features of the Appium desktop tool?

The primary role of the Appium Server is to offer a GUI or Graphical User Interface where you can do multiple things such as set options, see logs, or start and stop the server. What’s more, it eliminates the need to use Node Package Manager for installing Appium. The reason? That comes with the Appium desktop software itself. Besides this Appium server has three standard tabs naming Simple, Preset, and Advanced.

It allows you to see your application’s elements and get essential information about them through a single visual representation. What else, you can interact with them at a basic level if you want. However, before you examine these elements, it is necessary to set the Desired Capabilities first.

Doing this lets Appium Server know what type of platform and application you are about to automate. Usually, it includes text, number, file path, or JSON object. Please save them as “Presets” by hitting the “Save As” button and providing the desired name. Once you have done that, you can access it later using the “Save Capability Set” tab whenever you want to edit or launch a session.

The third and most important feature of the Appium desktop tool is the “action recorder.” This action recorder allows you to record user actions and generate test codes. However, to use this feature, you need to adopt a specific process:

We hope you got a clear picture of the Appium desktop tool and its features in this blog. So, if you want to get your mobile app tested by a highly experienced team of QAs, contact a well-established mobile application testing company in the USA.

6 Factors to Consider in Hiring a Software Solutions Company

6 Factors to Consider in Hiring a Software Solutions Company