Top 10 Lifestyle Hacks to make yourself Happy and Successful 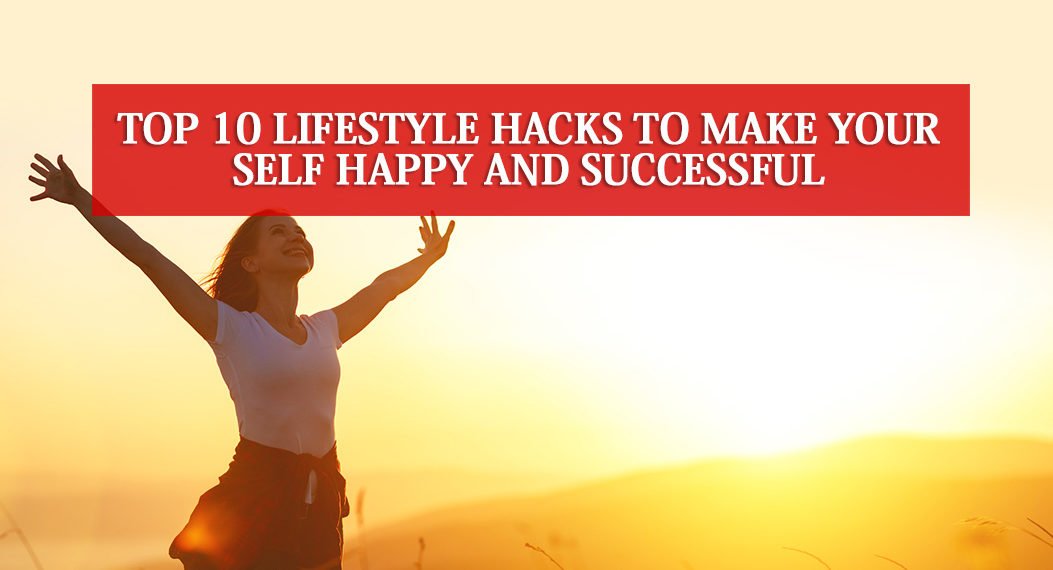 Share on FacebookShare on TwitterShare on Linkedin
Happiness is one of the most elusive goals in life and it seems everybody is running a race to achieve it, some may achieve momentarily but very few achieve completely. Everyone seems to want it but if that were the case then the whole world would have been a very happy place to live in. It is usually very difficult to be happy most of the time. This article is based on the Top 10 Lifestyle Hacks to make you Happy and Successful. There are certain ways which have been backed by science that can make us happier than at present we are. Some of the Top 10 Lifestyle Hacks to make you Happy and Successful are given below:

Top 10 Lifestyle Hacks to make yourself Happy and Successful

1. The optimum level of Physical Exercise

Every year people make resolutions to stay fit at the start of the year but as the year progresses the resolutions seem to become meek. Physical exercise helps in boosting morale and induces happiness. This has been proved scientifically in the book “The Happiness Advantage”. This study had confirmed the importance of exercise in our level of happiness. The study is based on treating three groups of medical patients. The three groups are treated with medicines, exercise and third with a combination of both. The group treated with medication had a relapse rate of 38% for depression. The combination group had a relapse rate of 31%, and magically the group treated with exercise had a relapse rate of only 9%. This represents that exercise has the biggest effect in treating depression. The secret is to start exercising now with small and routine exercises; this will certainly work in the long run.

The more a person becomes addicted to cell phones, the more unhappy and depressed have they become. In a survey of about 500 students, it was found that the cell phone users had lower grades and higher anxiety levels. This leads to depression, as people spending more time on smartphones and social networking websites, were more vulnerable to the levels of ‘social comparison’. This means that some other person’s life is much better than yours. This leads to a feeling of emptiness inside and ultimately leads to depression and unhappiness. Therefore using fewer smartphones would lead to making time for yourself and self-development which will ultimately lead you towards happiness and success. Even Aristotle had extolled that moderation in all things is the key to a happy life. The excessive use of even the finest technologies can reduce one’s happiness in meaningful ways.

3. Hack relationship with people in the real world

The time spent by people in the virtual world of the internet and social media has made humans incapable of interacting with people in the real world. The art of conversation is becoming extinct and people don’t even realize it. Everyone thinks the scale of success and happiness is in technology. But when there was no technology, people skills was the scale in measure of one’s happiness and success. Very few people understand the impact of another human being on their accomplishments. There are technological ways to be successful and earn happiness may be the technological world with the advent of big data and algorithms. But hacking people and understanding their behaviour in real life and reacting accordingly is the real hack towards success and happy life. Without the support of others like family, friends, colleagues, neighbours it is very hard to be happy with oneself.

It has been proved by science that spending more time outdoors like spending even 20 minutes of your day in good weather outside boosts positivity, improves working memory and incites happiness. In a study from The London School of Economics and Political Science, it has been found that people who lived outdoors near the sea, or forest and greenery in warm and sunny climate were substantially happier than people living in urban environments. The best temperature for happiness is 13.9 degrees Celsius which is scientifically proven. It has also been found that travelling 150 to 200 miles at least once a month for people living in urban settings boosts creativity. One can stay at cheap hotels, Airbnb at remote cottages or camp outdoors, while reading and staying away from technology, can impact your life in the right direction surely. It will boost happiness and success enormously.

The therapy of learning how to combat negative thoughts is known as Cognitive Behavioral Therapy. It has been proven by science to have helped people with anxiety disorders and clinical depression. The CBT helps in helping people recognize and reverse the harmful thought patterns while testing their validity and replacing those bad thoughts with positive ones. This helps to make the person happier, healthier and in a better mood. If we apply this thought in our life even if we don’t suffer from depression would surely help to make us happier and successful. Every successful person always works out the conclusion of his work with positive enthusiasm, irrespective of being successful in their Endeavour or not. Success doesn’t come overnight, but happiness can be found in every small thing one does every day. Therefore being happy and positive with your work and thought the process will surely lead to success.

Light therapy is an effective treatment for Seasonal Affective Disorders (SAD) which is a form of depression which onsets at a certain time of the season and also ends with the end of the season. The Verilux Happy Light can help in light therapy which is an effective treatment for SAD patients. In this treatment people suffering from SAD or even just unhappy normal people can use as routine procedure every day for 30 minutes. The device produces a light of 5000 lux and filters out UV rays to protect your eyes. This device can even be taken to work, as people often become unhappy and sad in the workplace due to work pressure. This device on 30 minutes of use can make minds clear, boost mood and increase productivity even at the workplace for people experiencing SAD or unhappy.
The product is available at various e-commerce websites and official Verilux website: www.verilux.com.

The term ‘Prosocial Spending’ means spending money on other people has been very helpful among people to boost happiness rather than spending on oneself. In a Harvard study in 2012, an experiment was conducted where half of the people involved in the experiment were given money to spend on themselves and the other half to spend on others. While they were made to recall the instances of spending the money, the people who bought things for others were happier of the thought while recalling that the people who spent the money on themselves. Most of the billionaires and millionaires all over the world have invested in philanthropic activities due to one of the reasons for the increase in happiness while helping others. Helping others doesn’t always mean monetarily but investing time on others can also lead to a very successful and happy life.

It has been always debated whether money can buy happiness or not. It has been proved in recent times that it can buy happiness but only if you spend it on experiences and not on materialistic gadgets or accessories. Study in psychological science has expressed that people who have spent money on doing something and experiencing its after-effects like vacationing, adventure sports, philanthropy, and Social aid have enjoyed more than people buying materialistic things and objects. Maybe buying things can bring happiness temporarily but not in the long run. This effect was measured by the level of anticipation on achieving of performing a feat like travel, social aid, and adventurous experience rather than the anticipation and happiness in buying or owning an object.

One-third of our lives have been spent sleeping, therefore, the importance of sleep cannot be underestimated in our lives. Afternoon naps have been found through research to have desensitized negative emotions and boost response to positive ones. Sleep deprivation can cause huge emotional problems and sleep boost can bring out an emotional advantage in people. The use of cell phones have affected peoples sleeping patterns ridiculously and therefore one has to cut off using cell phones and TV before nap time due to the harmful blue light they emit. Sleep also helps to recollect and memorize anything we have learned or experienced especially happy thoughts. Therefore a good night’s sleep is very important for a happy and successful life.

The top 10 life hacks to make you Happy and Successful mentioned above are all proven scientifically and will surely work if followed sincerely. The most important thing to be happy and successful is t become a good human being. Without self-sacrifice for others and hard work for yourself, it is very difficult to succeed and be happy in life.