Top 10 Health Conditions that Impact Your Mental Well Being

by Shrishti Gupta
in Health & Wellness
1 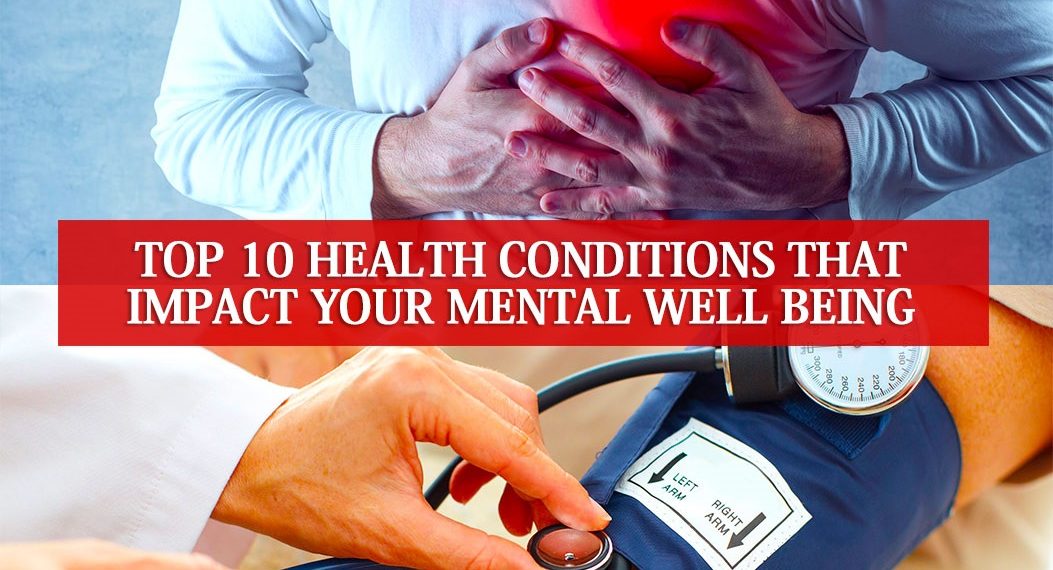 Share on FacebookShare on TwitterShare on Linkedin
Our body and mind are always treated as separate entities and the link between both of them is commonly misunderstood. But the truth is that mental health depends on physical health and the reverse holds good as well. WHO defines health as a state of total physical, mental and social well being. Mental health has a direct impact on physical health and vice versa. For example, people who are diagnosed with a terminal illness are most likely to suffer depression and self-hatred. And people who have suffered a head injury in the past are known to develop psychotic disorders such as schizophrenia later in their life when they encounter other stress or such as the death of mother or spouse
The association between mental and physical health are that poor mental health is a risk factor for chronic physical conditions. And likewise, people with chronic physical problems are at risk of developing poor mental health. People with serious physical health conditions are at risk of experiencing acute or chronic mental health problems. Understanding the link between the two health spectrum helps in exacerbating the health issue and helps people in leading a physically and mentally sound life. Let us discuss some of the common health conditions that take a direct toll on mental health here.

Some common health conditions that can affect mental health:

There is a significant relationship between heart health and mental health. Depression is an independent significant factor for heart disease. Depression is also common among those diagnosed with terminal heart problems such as congestive heart failure. Once the ailment is associated with depression, then the people become less motivated towards their disease care. They skip medicines, avoid taking the prescribed diet and also avoid any physical activity, enhancing the magnitude of the heart ailment. Studies reveal that anxiety and stress are also significant risk factors for heart disease.

Chronic stress and constant depression results in depressed and weakened immune system by initiating changes in the Hypothalamic, pituitary and adrenal axis. This, in turn, starts as a trigger for depression and anxiety. Changes in how the brain functions can have a big effect on one’s body. When a person suffers a depressed immune system owing to infection or other stressors, there is a release of inflammatory cytokines. These cytokines can get into the brain and alter the functions of serotonin, glutamate, and dopamine (neurotransmitters in the brain). This, in turn, results in depression. Cytokines can also disturb the brain circuits that govern motor activity, motivation, anxiety, etc. resulting in depression and anxiety disorders.

It has been postulated that Asthma and mental health conditions always co-exist. There is an increase in the incidence of depression and anxiety among children with Asthma compared with those who do not suffer Asthma. Also, parental stress appears to be an important factor in the development of wheezing in infants. Depression is common in people with asthma and this exerts a negative impact on its outcome. It can also result in panic disorders, frequent Asthma attacks, and exacerbations. People with depression and anxiety feel physically and emotionally drained as well that limits their ability to self-manage their condition. People who suffer pertinent asthma, have a persistent threat to life and along with their physical symptoms, they also suffer anxiety and panic attacks.

Obesity or overweight of increased body mass index above the average recommended BMI is found to be resulting in depression at least among teenagers. Studies prove that depression correlates with the onset of obesity and obesity predicts the onset of depression. It has also been estimated that obesity is the result of some mental disorders such as anxiety, depression, binge eating disorder, post-traumatic stress disorder and night eating syndrome. Primary care practitioners postulate that the potential underlying cause of obesity is mental illness.

When a person smokes, a considerable dose of nicotine reaches the brain just within ten seconds. Initially, the increased dose of nicotine improves concentration and mood and decrease anger and stress. It also relaxes the muscles and reduces appetite. The regular and frequent dose of nicotine leads to changes in the brain which can result in nicotine withdrawal symptoms. When the supply of nicotine decreases smoking temporarily reduces the withdrawal symptoms and hence reinforces the habit. This is exactly the reason why smokers become nicotine dependent. Smoking can also cause other physical symptoms such as headaches breathlessness etc., making people feel anxious, low and irritable.

People who are living with HIV and AIDS are at increased risk of developing anxiety, mood, and cognitive disorders. People living with HIV are twice as likely to suffer depression compared with those who are not infected with HIV. These conditions are however treatable and most people with such mental health conditions recover completely. Some form of stress can also contribute to mental health problems for those people living with HIV. The virus by itself can contribute to mental health issues because it enters the brain and resides in it. Some of the opportunistic infections associated with HIV can enter the nervous system and results in the changes in behavior and functioning. Some of the neuropsychological disorders such as dementia and other cognitive disturbances are associated with HIV disease.

Physical activity in any form is found to keep a person physically healthy and also enhances their mental well being. Research shows that doing exercise influences the release and uptake of good chemicals such as endorphins and the release of other feel-good chemicals in the brain. Even 10 minutes of brisk walking increases mental alertness, positive mood and energy and affects the mental functioning effectively. By physical activity, we mean the movement of the body that uses the muscles and expends energy. Even gentle forms of exercise can improve the quality of life significantly.
Good nutrition is also a crucial factor in influencing the way we feel. A balanced brain food includes a good amount of proteins, complex carbohydrates, essential fats, minerals and vitamins, and water. The food we eat influences the management, development, and prevention of a number of health conditions including Alzheimer’s and depression.
Final words:
Mental and physical health are linked fundamentally. There are multiple associations between mental health and chronic physical conditions that significantly impact the quality of life of people. The relationship between mental and physical health is evident in the area of chronic conditions such as heart disease, HIV and AIDS, etc. The determinants of health impacts both mental health and physical conditions. The key aspects of sound mental and physical health are nutritious food, good physical activity, social inclusion, and societal support. Understanding the link that exists between mind and the body is the first step in developing strategies to decrease the occurrence of co-existing conditions and support those who are living with mental and physical illnesses already.

Top 10 Electronic Grooming Gadgets That Every Man Should Know

Top 10 Electronic Grooming Gadgets That Every Man Should Know